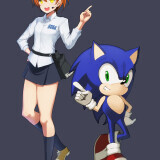 Uploaded to Jerod — 9 months ago

Jerod along with some characters that have characterized his streams throughout the years. Sonic represents the numerous Sonic songs Jerod has played. Honoka Kousaka represents the numerous times Jerod has played Snow Halation in some form or another. Vaporeon is the iconic Pokemon to Jerod's streams. Wario has been a big part of the Twitch chat's support. Finally, Sans represents Jerod's numerous covers of Megalovania and his accomplished goal of beating him in Undertale.